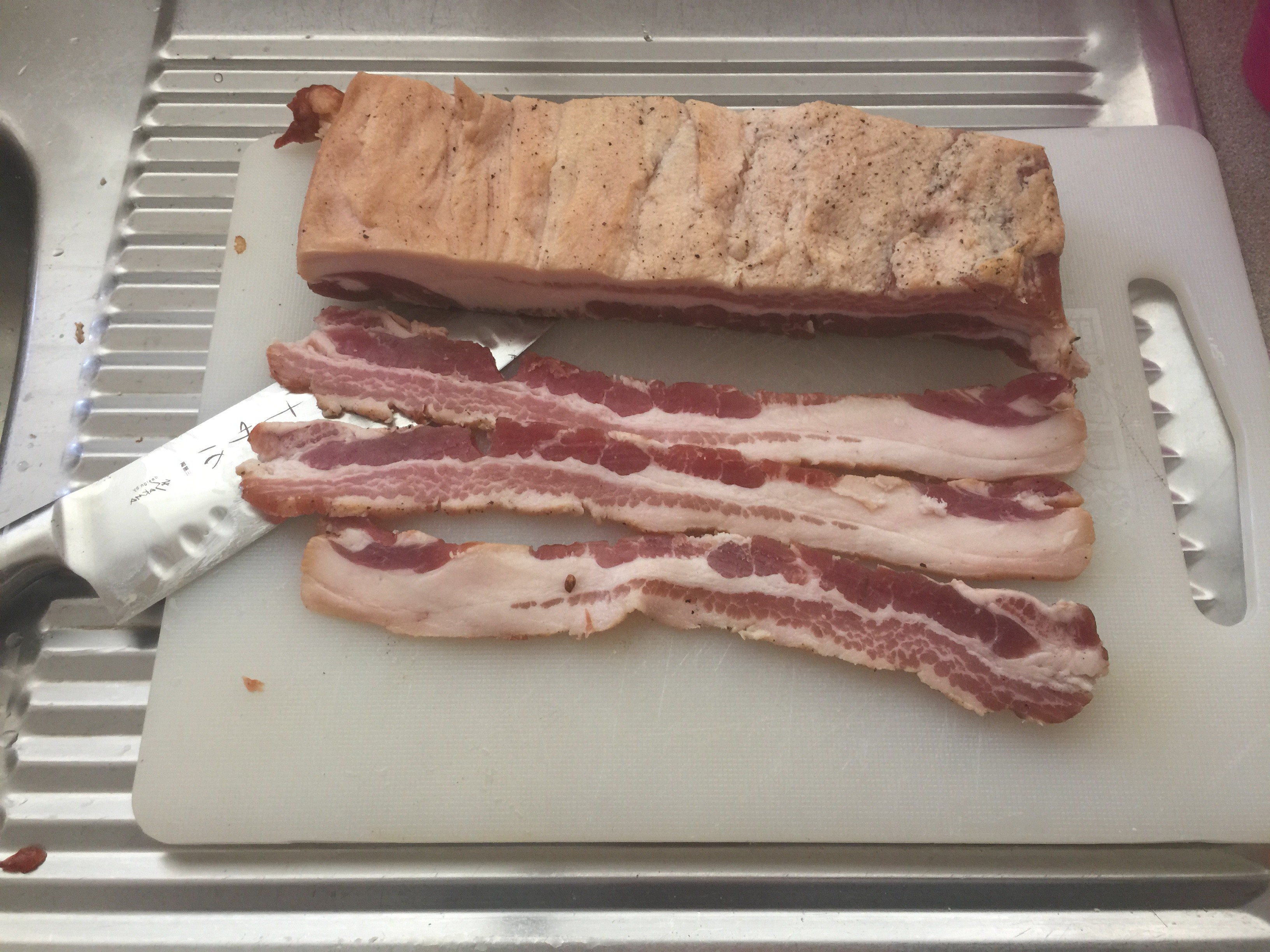 Homemade Bacon – This is my new reason for living!

My first attempt at homemade bacon has been a success! Yew! I had been looking at other posts on the Australian Barbecue Alliance’s Facebook Page about those that had cured their own bacon and just knew I had to play that game.

I found a method I liked, and set about the loooong, process of walking the stairway to bacon heaven,. This post had some great pics and easy to follow advice, so naturally, ‘If he can, I can!’

I bought two slabs of pork belly at about 1kg each. They cost in the vicinity of $12.50 a kilo. So far, way more expensive than regular, store bought bacon.

The missing ingredient was Intacure #1. What the hell? More research found it is readily available and I bought mine from  the Melbourne Food Depot. Paid $22.20 delivered to the Gold Coast! There are some who are cautious about using sodium nitrites, but my reading suggests, as always, follow the guidelines and stay safe.

The guide suggested two ways to go about it. Dry Cure and Wet cure. I had two bellys, so, lets give both a try. Timing meant that I should have a kilo of bacon 8-9 days from starting and then an second kilo in 15-16 days time. Makes sense to me. I’ll just have to remember to keep the rolling supply going; just like planting enough seeds in the garden to keep your herb supply replenished.

Lets cut to the chase. After 3 days, the dry cure needed to be turned over. A stepping stone to bacon bliss, but boring. I wanted bacon!

Seven days in and I had a slab of cured bacon! Yee Haa! But not quite ready yet. I fried off 2 small slices to check for saltiness and whooshka, super salty. But the honey tones were there and the flavour was amazing. The instructions suggested soaking for an hour in cold water to reduce the saltiness. Done.

Let there be smoke

Later that day, the most important stage, the cold smoke. I had to give the homemade bacon some smoke. There is no doubt about that. I’ve never cold smoked before and wondered I had the skills. Just so you know….Nailed It. See my post here (coming soon) about my first cold smoking effort. The slab came out and straight in to the fridge uncovered, overnight for the last stage! Bacon Bonanza tomorrow!

There was a glitch in the system. No time for bacon in the morning! Noooooo. I had to drop the kidlets to school and was required to be father of there year and stay for Under 8’s day! My plans for bacon laden breakfast were spoiled!

It had to be for lunch. And there the Brisket and Bacon Burger was born. Along with a couple of extra slices for me and a couple for the wife as well. Winner. If I can get Samantha to like my home made bacon, I would have free reign to continue down my road of bacon love!

Check back next week for the second issue where I taste the wet cured version.

Got any home madebacon recipes or flavour ideas for me? Leave a comment and I’ll give it a go!